Looking for the boat I was born on - Sirius. 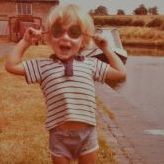 By JoeSlow,
June 12 in History & Heritage