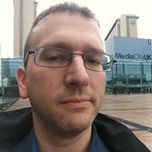 By ste_b, January 4 in Lister