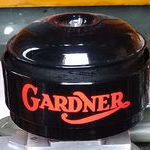 By Unix,
February 9 in Boat Equipment