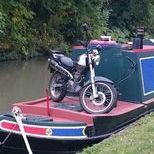 By Andy_B, March 6 in Lister